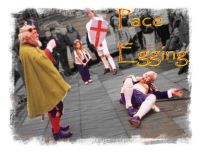 It’s Easter Monday. Inside the Dusty Miller in equally dusty Middleton, people gather in secret, arriving at intervals in groups of one or two. Could they be preparing for some strange and arcane ritual? Yes, actually. This is Pace-Egging and it involves singing, dancing and getting very very drunk.

Pace-Egging is an old Easter begging custom. By performing a “play”, the poor of the parish could attach some moral legitimacy to asking for money (otherwise illegal), ie they were giving entertainment in return for alms. There certainly seems to have been a Pace-Egging tradition in Middleton in the nineteenth century (though it probably goes back to the seventeenth at least), and this was revived in 1967, largely due to the efforts of Mike Harding. However, it’s Martin Gittins (playing the Doctor from 1967 to the present day) who’s primarily responsible for keeping the creaking show on the road. Some sort of OBE really ought to be in the offing.

The players perform at seven pubs in Middleton, inside or out depending on the weather or space available. The first performance is at the Dusty Miller, near the bus station, the last at the Ring O’Bells at the top of the hill. Egg rolling and partying follow. Yes. . . it’s a PUB CRAWL. . . do you see? Of course, it’s a pub crawl in the context of keeping alive an important lancashire cultural tradition – so that’s all right, isnt it?

Pace-Egging plays are performed in many locations around the north of England. Each has its own traditions and variations. The plot of the Middleton play revolves around St George fighting the Turk. At first defeated (to the accompaniment of boos), St George is brought back to life by the mysterious Doctor and finally defeats his adversary (cue much cheering, drunken revelry and pleas for money, eggs and beer). The whole thing is enormously “PC”, with someone blacked up as the Turkish Champion, men dressed as ladies, etc.

The Story and Characters

The King of England then challenges the Turkish Champion. St George comes on and he and the Turk fight. The Turk kills St George (“Boo!”).

The Doctor is called for and arrives with his horse, the two engaging in some repartee in which the horse replies by pawing the ground, the Doctor interpreting. At the request of the King, the Doctor proceeds to resurrect St George, accompanied by a great deal of comedy by-play involving the somewhat eccentric contents of the Doctor’s bag. 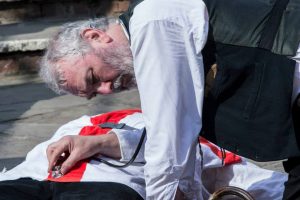 St George arises and, to much rejoicing, defeats the Turkish Champion. The minor characters say their pieces and the company finish with their closing song.

There is a script, of sorts (much of it originally written by Mike Harding), to bind this all together. However, what with the opportunity to drink at every pub visited, respect for the text tends to wax and wane, with the audience chipping in one-liners at every opportunity .

If you want to know more about Pace-Egging the best thing is to come along on Easter Monday! We usually start at the Dusty Miller at about 12 o’clock. If you don’t want to wait that long, try buying Dr Eddie Cass’s very fine book, “The Lancashire Pace-Egging Play”, from which most of the above information is taken (published by Folklore Society Books, ISBN 0 903515 22 9).